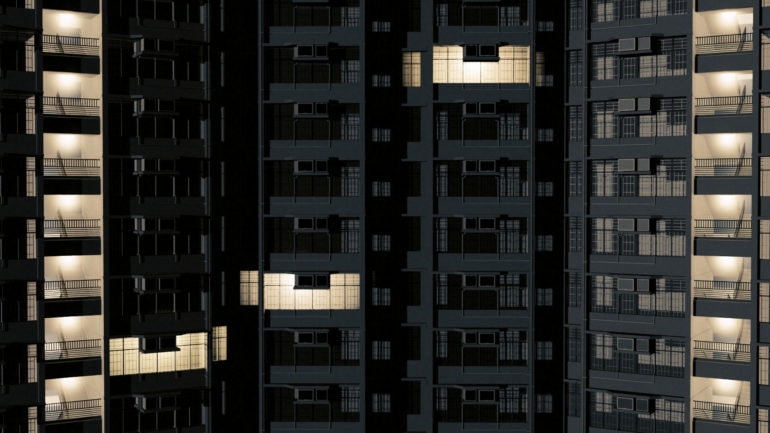 A gang of teenage girls plays cannibalistic games in a Kowloon housing estate while philosophizing about anthropomorphized animals used as a spokesperson for food products made of their species.

This film is in production. Watch the trailer below.

Hong Kong late at night in a Kowloon housing estate, a gang of six teenage girls gathers in the corridor to hang out and play. The fluorescent light in the hallway flickers and casts long dark shadows. Aside from the girls, the corridors are desolate.

The girls are all dressed in the same outfit but different colors. Shiny reflective leotards, knee-high 70ies basketball socks, high-top sneakers and motorcycle helmets. They vary in scale in accordance with their importance in the story.

They greet each other by banging their helmets together. Miss Black, the biggest and the leader, head butts Miss White; she almost falls over. Miss Pink, copies her, she is the smallest, and her helmet ends up in Miss Whites’s stomach. Miss White slams into the wall. The knife and cup holding twins, sporting surgical green, do a lazy balancing act by leaning against each other’s helmets. One of the twins raises the cup to the group while the other plays with the knife. Miss Orange, the second smallest, bangs her head against the wall, nobody notices.

Miss Black walks away from the group and starts running. Miss Pink quickly follows. The twins and Miss White follow suit. Miss Orange keeps banging her head against the wall. The first part of their nightly ritual has started with an endurance run through the corridors and staircases.

Miss Black trailed by Miss Pink sets the pace. The twins are right behind them followed by Miss White who seems to have a hard time keeping up with the rest. Miss Orange moves in the opposite direction, oblivious to the others.

They run for hours through the corridors and staircases, daring each other to stop, pushing, punching, head butting and shoving each other. The toll of the perpetual exercise seems to create a hallucinatory experience. The hallways transform into vortexes making the girls run upside down and speed through kaleidoscopic tunnels. A school of plastic shiny reflective tuna fish appears and swims along with the girls. They lose all track of time and space.

Miss White collapses and falls endlessly into a black hole stretching and condensing her, spinning rapidly.

She crashes violently onto the hallway floor. All visual hallucinatory experiences disappear. Miss White gets up on her knees and looks up. The other gang members are looking down on her breathing laboriously.

One of the twins cuts Miss White in the stomach. Blood drips down onto the floor. The other twin fills the cup with the fresh blood.

Once it is filled up, she takes a sip and passes it around. The girls all drink from the cup, including Miss White. They are all covered in blood.

The whole gang is in an elevator going down to the basement to their underground lair. The volume of the muffled music in the background slowly increases. Until the elevator stops. The doors open. Music at full volume greets them.

The underground lair is dark and empty, with a massive sound system completely covering one of the walls. Repetitive loud music plays through the bare pulsing speakers.

They all take off their blood-stained clothes and start dancing synchronously. They dance what seems to be for a lifetime. Entranced by the repetitive music and movement, their perception of reality becomes warped and hallucinatory visuals take over their reality. A school of tuna fish swims around them.

Miss White still bleeds from her stomach. She closes her eyes and collapses on her knees. In a psychotic frenzy, her fellow gang members attack her and eat her alive ripping off body parts and pulling out intestines.

After they are done eating the girls sit down next to each other against a wall, covered in partially eaten limbs. Miss White’s mutulated body lies at their feet. Miss Black sits on the outside holding one of Miss White’s arms and philosophizes about Charlie the Tuna. He is an anthropomorphized animal used as the spokesperson for Sunkist Tuna, selling out his fellow tuna while trying hard to become good enough to be killed and canned himself.

Miss White succumbs to her injuries.