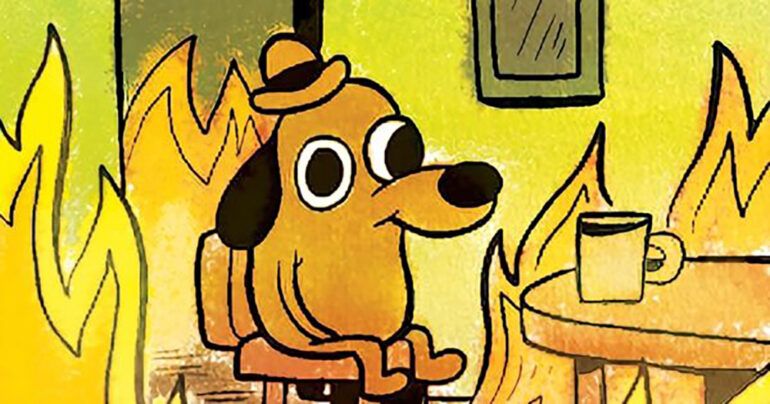 Art is suffering, and that is OK.

I feel guilty; I should be creating; I have an abstract due. I need to finish this essay. But I am sitting on the couch streaming Bad Boys for Life while solving a Sudoku. Earlier I took an elaborate bath while watching episode six of the final season of The Expanse, mindlessly thumbing through my Instagram feed. I am the dog surrounded by fire; this is fine.

Many years ago, I proclaimed myself an artist, and thus I was. I make it and talk about it at conferences and festivals, at schools, and in my head. The worst question you can get as an artist after the one about the used software is the one on inspiration. Artists aspire to surf the wave of inspiration, but talking about it is hard; it makes us vulnerable, and often we don’t know. I do know the workings of the creative process, driven by inspiration. It controls my psychological state, my entire life. I try to keep my creative process perpetual, going from one project to the next, always searching, thinking, and creating. This process does not change. You only get used to the progression of the steps, anticipate them, own them. If you do not follow these steps, the result is usually not very good. Procrastination is the action of unnecessarily and voluntarily delaying or postponing something, despite knowing that there will be negative consequences. Procrastination in art is not a waste of time. It may appear that you are not doing anything constructive, but you are molding the idea into something workable. It is essential and time-consuming, often accompanied by guilt, self-doubt, flirting with unrelated ideas, and anxiety. It is the quest for a creative solution riddled with dead ends, wasted time, and things that should end up in the dumpsters of creative stillbirths. Letting go of them can be as hard as amputation, but nobody wants to know how you solved the creative problems and how much artistic waste you produced. The amount of time spent on an idea is never wasted, but it does not equate to usability. Voluntarily delaying or postponing is essential. Procrastination facilitates the fermentation of a notion of an idea into a ripe and mature concept. This quest takes up most of the time and leaves barely enough for bringing it all to fruition. Once we have a full-bodied vision, the overwhelming realization that we have little time left results in panic and doing all the work while crying. I used to get pissed with myself and vow to plan better next time, but not anymore; it is pointless because this is the way. Accepting this progression is going to make everything easier. Trust me, I should know; metaphorically, I am writing this essay while panicking and crying, fantasizing about films I need to make, inebriated. The creative process is like an iceberg. Most of the work done is invisible to the undiscerning consumer, as it happens in the private surreal metaverse of the artist. But they are all billable hours, do not forget to invoice every one of them.

In Franz Kafka’s Metamorphosis, Gregor Samsa wakes up and realizes he is a huge insect. Gregor’s primary concern is not being a big bug but how to get to work; he identifies himself by his profession. If he can not do what he does, he is not complete; he is not him. In 2004 I was diagnosed with Miller Fisher syndrome, a variant of Guillain-Barré syndrome, an autoimmune disease that attacks the nervous system. The disease progresses from double vision to paralysis and concludes with depression; death is a possibility. I suffered an existential crisis like Gregor Samsa; how would I make films if I had no control over my eyes and extremities? Who am I if I can not procrastinate elaborately?

There are six emotional states during the creation of art. The first is when you get an idea and think it is fantastic and know the result will be brilliant. It is followed by reality and doubt kicking in and then declaring it is all crap while being overwhelmed and bored with it all. This evolves in the declaration that the artist is crap. You are now crap. You are officially an artist when you get to this state; you now identify with your work. Your metamorphosis is complete. The last two states evolve, often slowly, from a defeated acceptance of the work to a proud bragging parent. Artists live on the narcissistic spectrum. They need to fluctuate between this is amazing and crap, and so am I. Artistic creation happens in the heart of the emotional battle between absolute narcissism and crippling self-doubt. The ones stuck in crippling self-doubt make work that no one will ever see or make no work at all—stuck in procrastination limbo, please don’t stay there. On the other extreme are the boasters, the one-trick ponies, usually successful but not necessarily bursting with talent.

Yayoi Kusama, one of the most important living artists to come out of Japan, has lived in a psychiatric hospital since 1977. She spends every day a few hours creating art in her studio. As a child, she was diagnosed with severe depersonalization disorder. She suffers from inevitable suicidal thoughts and escapes these thoughts through art. Kusama is often quoted as saying: “If it were not for art, I would have killed myself a long time ago.” Art is suffering, and that is OK. I suffer from bouts of depression and anxiety, and I often think my work and I are crap and fucking brilliant. Creating work, art, is my lifeline, my Eternal Recurrence. I am OK. Aristotle said that depression is not an ailment but part of being creative. Chuck Jones calls anxiety the handmaiden of creativity. Agent Smith explained to Morpheus in The Matrix that as a species, human beings define their reality through misery and suffering. It all makes sense to me. I live to create, and I create to live. It’s beautiful shit.