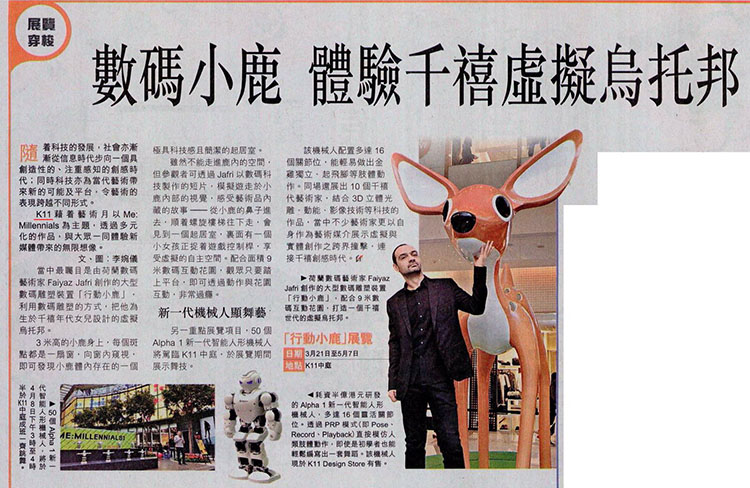 Here’s a great example of just how full of shit or naïve or maybe stupid I can sometimes be. I’ve always tried to champion films that had interesting, strong ideas/concepts no matter how pretty or beastly they look.

Fubon Art Foundation is dedicated to promoting aesthetics in daily life. One of its major exhibition projects, “Very Fun Park”, which actively brought forth a “museum without walls” approach to art, received the “Taipei Culture Award” by the Taipei City Government in 2010 and the “Culture and Creative Industry Awards” by La Vie Magazine in 2014. The Foundation curates nineteen artworks from four artists around venues for the 2015 Fubon LPGA Taiwan Championship. These works not only bring energy and elegance to the competition, but also inspire positivity from the audience… 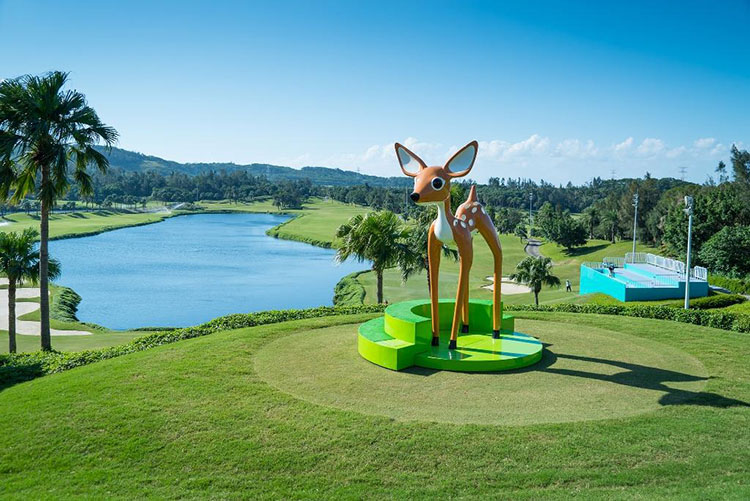 …Mobile Fawn, with big round eyes and floral spots, is from Dutch artist Faiyaz Jafri. Each spot on the fawn is a window, through which we will surprisingly discover a simple, clean and high-tech living room within its body. The man-made environment is preserved in an organism portrays indispensable longing between our mind and nature.

In this upcoming colloquium session we will have artist and film maker Faiyaz Jafri coming in to showcase some of his films while talking about the development of his visual language, influences & inspirations, the collective unconsciousness and his obsession with the Bambi character. The talk will be on the 6th of October, and will be…

The most public of public art unfolds on Denver’s giant LED screens
The Denver Post, 9/20/2015 by Ray Mark Rinaldi

Evolving computer programs allow artists to pursue rich and ambitious visions. For “This Ain’t Disneyland” on Friday’s all-commission program, artist Faiyaz Jafri uses drawn animation to explore his flashbacks from Sept. 11 and how they intersect with the wholesome memories he has of Disney cartoons as a child. Over the course of 1 minute and 10 seconds, a pair of twin towers come down and, in their places, rise creatures with round mouse ears. 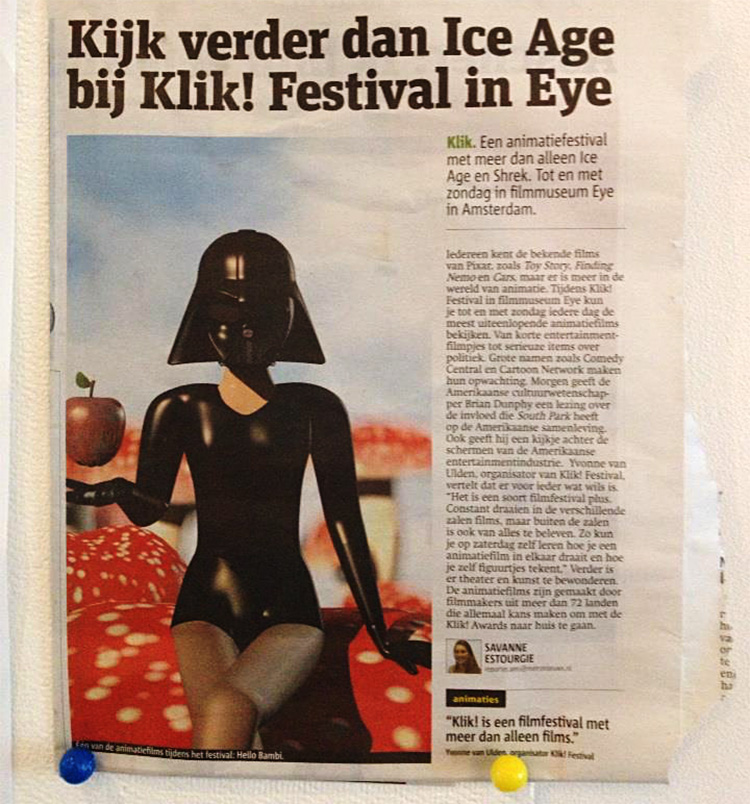 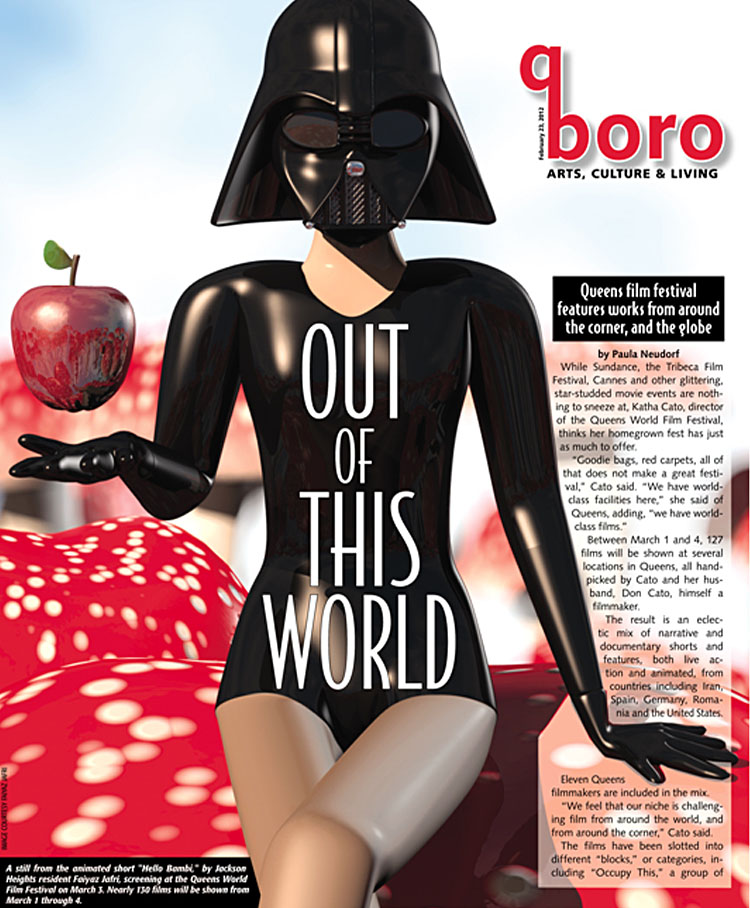 For Jackson Heights animator Faiyaz Jafri, whose six-minute film “Hello Bambi” is showing as part of the fest’s “Alternate Styles” block, one of the best parts of the event is being able to walk to his own screening. Originally from Holland, Jafri moved to New York in 1998 and settled in Jackson Heights several years ago.
“Hello Bambi” is Jafri’s 10th animated film. A rewriting of a well-known fairy tale ending, it depicts Snow White’s hallucinatory dream after eating the poisoned apple, as she travels to an emergency room in a glass coffin hitched to a silver train.
The pyschedelic ride features an evil queen in a Darth Vader mask, a trip in a DeLorean and more. It has already screened at several festivals, and won the “Best Animation” prize at last year’s Big Apple Film Festival.
Jafri, whose daughter Vega is 6 years old, said the idea of toying with the fairy tale came about in part because he didn’t want Vega “to become that girl who is waiting for her prince.”
“The world is not that beautiful, I guess, or that innocent,” he said.

“Faiyaz Jafri’s psychedelic Hello Bambi could probably be best thought of as Snow White seen through the prism of Enter the Void. It’s a haunting look at the Fairest-One-Of-All (post apple eating) as she confronts her own mortality, passing through various pop culture artifacts – Darth Vader, a DeLorean, Thomas the Tank Engine – on her journey to the end.
Jafri, in a post screening Q&A, exclaimed that after reading numerous bedtime stories to his daughters, he became sick of the naïve pat messages the fables propagate. Snow’s journey through pop culture, in such light, could be thought of as a rejection of the media saturated lies we tell our young. A rejection of fantasy as told through the fantastic. Regardless using Bambi as pseudo stand-in for the Grim Reaper himself is brilliantly perverse.”

“And whatever Hello Bambi ( Faiyaz Jafri, USA, 2011, ****) is all about I have no idea, but I loved every surreal minute. The safest bet is to say that somewhere along the line, Snow White has taken a bite from a poisoned apple and is therefore en route to hospital. Just what sights appear along the way, however, can only be described as Andy Warhol’s hookah hallucination. A woman sits upon a mushroom, her face concealed by a Darth Vader mask. A Delorean flies through cyberspace. A runaway train zooms through a kaleidoscopic tunnel. Everything has an impossibly shiny, hermetically sealed plastic veneer and is soundtracked (or as Jafri himself puts it, ‘respectfully assaulted’) by a techno version of Chopin’s Funeral March. It’s all painfully postmodern with absolutely nothing to say. Subtle it ain’t, but fun you betcha.”

Faiyaz is a 3D illustrator of Dutch-Pakistani decent, who recently moved to Hong Kong after years of living in New York. Reinterpreting iconic motifs, he depicts mostly female characters in scenes that flicker between innocence and pornographic violence or humiliation. His work builds a tension between soulless CGI atmospheres and the longing for romantic redemption.

Faiyaz Jafri specializes in creating a minimalistic virtual space. His highly stylized approach presents the contrast of humanistic humor, which constantly challenges our traditional views. His artworks peculiarly combines childlike innocence with dazzling horror and humor, yet it invokes a profound sense of enlightenment.

Fayaz Jafri is a digital artist. Originally from Pakistani descent, he was born and raised in The Netherlands and now is active on the New York scene. If some of his illustrations and animations wink at pornography, the distinctive mark of his job is aesthetic purity. And this very duality is at the centre of his artistic production, where the rigour of 3D computer graphics, minimal and aseptic, is combined with a hard, sensual and violent imaginary. His attitude towards modeling is evident, and the accuracy of details generates an artificial perfection. A former murals artist with a master in industrial design and engineering, Jafri finds his cultural points of references in photography as well as in cinema, pop art and japanese comics. The obsession for Bambi, the cartoon fawn, is evident. It appears frequently in Jafriâ€™s artworks showing his two faces, the innocent and the seducer one. This obsession is so obvious that the artistâ€™s personal website is called bam-b. It is an evolving flash gallery that let the visitor enter in his alternative world, where ethereal inflatable mutant-babes enliven situations a-la-Cronenberg, or where the sweet fawn mutate into a bloody creature. Looking through artistâ€™s digital portfolio, that includes collaborations with major glossy magazines and corporations, seems that the last collective exhibition (‘Oh my deer! Feast of Mind’) he took part in squares the circle. Fubon Art Foundation in fact, commissioned the Dutch designer to make a physical sculpture of Bambi, transforming his virtual 3D in three real dimensions, a sort of ‘mise en abym’ of reality simulation.